Angola’s constant growth rate has been conducted over the years through the oil sector, with oil production and associated activities corresponding to 50% of GDP, and with an 89% rate on the country’s exports.

Angola holds about 8,100 billion barrels of proved crude oil, remaining the second largest oil producer in Sub-Saharan Africa, being overtaken by Nigeria. Angola has around 383 billion m3 of proven natural gas resources, where the first exploration of LNG took place in June 2013, since most of the natural gas is re-injected in order to optimize recovery strategies for oil production. The tax system for oil operations in Angola began in the 1950s, with decrees 41356 and 41357 issued in November 1957 for this purpose. The tax regime established by these decrees, corresponded to the traditional concession system, whereby investors were recognized as the owners of oil reserves. This system was very common, not only in Angola but in all emerging countries, that optimized a greater oil discovery by the second half of the 20th century. It is possible to see, that a relevant part of the difficulties regarding legal and commercial operations, resulted from the change in licensing systems. Many states have chosen to impose mechanisms of direct expropriation, such as Mexico with Pemex, Venezuela, and many other countries, especially in the Middle East where it was created their National Oil Companies (NOC). This contributed to an increase in taxes on oil income, as well as certain doubts in terms of tax stabilization clauses by investors.

The end of the 1960s, as well as the beginning of the 1970s, was reflected by the creation of models as Production Sharing Agreements, and even Service Agreements or Licensing, mostly in Joint Venture with recent NOCs, especially with a high increase in corresponding taxes. This was common not only in emerging countries, but also in mature petroleum systems, as in the UKCS.

A parallel combination, resulting from tax increases with an increase in the price of the oil barrel on the international market, led to the creation of other specific tax regimes, with greater uncertainty for investors.

However, Angola has been developing with precision and some stabilization its system of contracts and licensing. One of the factors that can contribute to this stabilization, is the fact that it has never changed the political party in office (MPLA), which has allowed security in terms of stabilization clauses. The tax regime in Angola applies to all Angolan or foreign entities, within the tax jurisdiction that performs E&P, as well as sales and export, transport and infrastructure, not only crude oil and natural gas, but also other refined products such as paraffin, naphtha, sulfur, helium, carbon dioxide, and saline from oil operations. The current concession regime, like its resulting capital gains, has been applied since January 2005, and the concessions for E&P, after the public tender procedure, are awarded via concession decree by the Angolan Government, granting the national concessionaire Agência Nacional de Petróleo, Gás e Biocombustíveis (ANPG) the right to develop an oil concession, differentiating itself from Sonangol, which currently operates as a NOC.

However, there are three different types of contracts, each with different tax regimes:

The fees applied to all oil tax regimes are mainly divided by:

Regarding Investment Incentives, there is an uplift on development expenditure under investment allowance. Also, the incentives granted include the PIT reduction from 50% in a PSA regime, and 65.75% regarding Partnerships and RSC, to the equivalent of the Industrial Tax Standard Rate which is 30%, to all public companies owned by the state or Angolan public companies, or privately owned companies wholly owned by Angolan nationals.

Relative to PSA, which is the preferred model, net profit is composed by the difference between total oil, and oil for cost recovery. This (cost oil) corresponds to the portion of oil produced that is allocated for recovery and exploration, as well as development and administration, and service expenses. On the other hand, profit oil is shared between the state concessionaire and its investing partners, based on the accumulated production, or the return rate of the contracting party.

However, relatively to the oil crisis these days, the government is trying to reverse the decline in oil production, having reduced tax rates on minor fields from 20% to 10%. The agency in charge of auctioning off the oil blocks, has also shown hope of increasing investor interest, nationally and internationally. 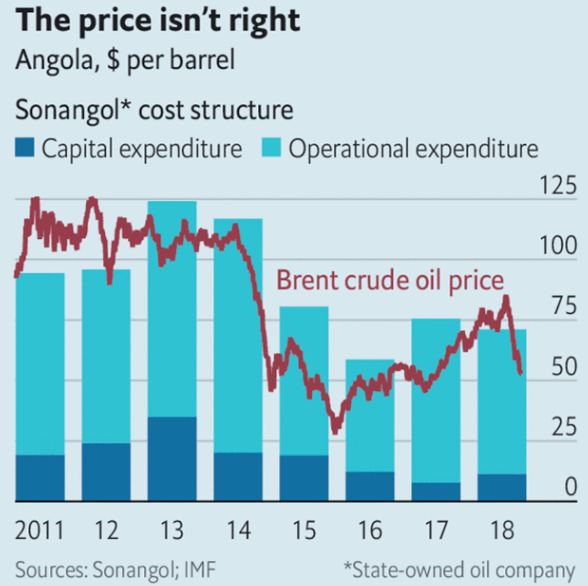 It may be seen that Angola faces a dramatic problem, and this is represented by the decline in the value of oil, in order to the cost structure that the national sector entails. It is necessary for Angola to look for examples to follow in terms of real separation of powers, which can make a better assessment of the usefulness of oil taxes in the country’s economy. Oil resources in Angola must really be seen as a vehicle for investment in sectors of public utility, as well as in real promotion of economic diversification, and not just as a resource for profit itself. However, the Angolan Government remains focused on developing the oil sector, with 55 blocks being subject to bids up to 2025, where the government also intends to develop several refinery projects in the country. It is worth mentioning that the Angolan Government did not put aside renewable energies, bearing in mind that this is one of the primary paths in the country’s energy execution, such as the construction of photovoltaic parks, and many others, which is contemplated in their 2025 national development plan.